“Dare not say that man forgets sooner than woman, that his love has an earlier death. I have loved none but you. Unjust I may have been, weak and resentful I have been, but never inconstant.  You alone have brought me to Bath. For you alone, I think and plan.”
Captain Wentworth, Persuasion

It is no surprise that I would begin a post about Bath with a Jane Austen quote. I have enjoyed her works since I was introduced as a high school freshman to Pride and Prejudice by my honors English teacher, imagining myself exploring the green hills of England and meeting my own Mr. Darcy. As I’ve gotten older, Persuasion has become my favorite of her novels. With the most romantic plot about a second chance at true love, and a soul-piercing, swoon-worthy letter from the dashing Captain Wentworth, it had since surpassed any other novel in the list of my personal favorites.  And the bulk of the action in the romance takes place in Bath, where the heroine, Anne Elliott’s family takes a home in Camden Place, today known as Camden Crescent.

There is much to see and experience in the city of Bath in Somerset, England, with many points of interest within about a mile radius.  Bath is the largest city in Somerset County, located just under 100 miles from London, and is recognized as a World Heritage Site. It is perhaps most famous for the Roman Baths, which were originally built in the first century A.D., when Britain was governed by the Roman Empire. There is also the Jane Austen Centre, Bath Abbey, great shopping, and much more.

Steam rises from the warm springs on a cool day.

Not much different from the 19th century, except now we know we shouldn’t go in.

A view of the Baths from what is street level

The Roman Baths were built on a site of a natural hot spring. The spa, Aquae Sulis was built and the site was used as a temple as well as for public bathing up until the end of the Roman rule in Britain.  Following the end of the Roman Empire, the original construction was in ruins, some of which has been preserved throughout the site and can still be seen today. The site was rebuilt several times through the medieval period, however the current construction was done in the 19th century, just in time to be a hot attraction in Jane Austen’s time. Once a popular spot to “take the waters,” it is no longer recommended for bathing.  The water quality is poor, and it has been found to contain Naegleria fowleri, the deadly brain-damaging amoeba that thrives in warm waters such as hot springs.  Now the Baths are a popular tourist attraction, with many visiting to take Instagram photos and learn about their history.  The audio tour was a helpful guide in learning more about the Baths in greater detail. There are also workbooks for school-age children, which helped to focus Sami as she explored the Baths.

Of course, we visited the Jane Austen Centre. Located on Gay Street, it was within a half-mile of the Baths.  The museum itself doesn’t look like much in a row of buildings, however like the TARDIS in Doctor Who (another BBC television series), it was bigger on the inside. The Centre goes up three stories, has a tea room for those who would like a Regency-themed afternoon tea, and a visitor shop. We did the tour, which included a video on the life of Austen as well as a cheesy video on places in Bath that were mentioned in her novels, many of which can still be visited today.  The museum portion had exhibits regarding the author and her life, with a wax statue said to be the most accurate depiction of what she may have looked like.  The family really enjoyed getting dressed up in Recency-style costumes and taking a family photo with a wax Mr. Darcy. I’d have preferred the real thing, just saying… 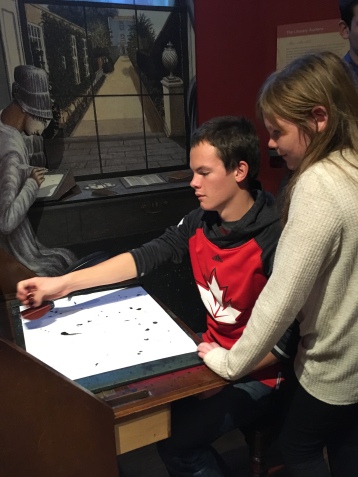 “But do you always write such charming long letters to her, Mr. Darcy?”

Not so much a museum or place for an extended visit on its own, Pulteney Bridge was originally built in 1774, and spans the River Avon. It is a working bridge that carries motor vehicles, pedestrians, and cyclists, and is unique in that it has shops and restaurants that span across the bridge. It is one of only four bridges in the world to have that construction.  We didn’t go into any of the shops, and indeed, the husband almost missed the fact that we were looking at Pulteney Bridge because of the shops. The bridge itself is pretty; it is an arch bridge constructed of stone and is now considered a Grade I listed building and National Monument. I enjoyed the view from the bridge. I thought it answered what I imagined England to be.

Some things to consider:

After visiting all the touristy spots, there are many places to eat, shop, and just hang out.  There are a number of cute cafes, as well as chain restaurants.  We ate at McDonald’s on arriving in the city and compared it to the McD’s we are familiar with in the States. Our review: The U.K. McDonald’s tasted healthier than American McDonald’s, and the kids didn’t love that. We also visited a favorite store, Anthropologie. There were similarities in inventory as we compared Bath to Pasadena, but there were other items that we didn’t see at home, along with unsurprisingly, more cold weather items.

Parking is at a premium here.  We parked in a public parking structure which was about a mile from most of the places we visited.  There is some street parking, but as many of the streets are quite narrow, I would definitely recommend parking in the city centre and walking to your destinations.  It was much easier to enjoy the sights of the city once the van was parked. The cost was reasonable; I paid 8 GBP for a full day.

Bath is a truly lovely place to visit, Austen lover or not.  There is so much to learn, see, and experience. Happy Christmas and happy trails!

For source information and to plan your visit:

Welcome to the Jane Austen Centre and Online Giftshop