As I transition from our stay in the English countryside to London, I’d like to take a minute to talk about the issue of transportation while visiting Great Britain. For us, our primary mode of transportation changed when we headed into London, and there was much we learned from the experience of just getting around.

As mentioned in a prior post, we rented a car for our first six days of travel. We stayed in Lymington, Hampshire, over 80 miles away from London Heathrow International Airport. The plan was to visit the counties surrounding Hampshire to do our sightseeing. These trips were fairly spread out, often involving drives of over an hour and longer, so it made renting a car the logical choice. Renting a car was pretty easy. We rented through Enterprise, which has a pick up location by the terminal 5 parking at Heathrow. I did not need an international driving permit to rent the car; my California state-issued driver license was sufficient. Driving the car on the other hand was another matter.

We rented a large, eight-passenger Hyundai van, which was needed to carry six passengers plus our luggage for the ten day trip. This car initially didn’t look too much bigger than my Kia Sedona people carrier, or minivan, back home, but there was quite a difference in the way it handled. That combined with the boxiness of the vehicle made the first time on the road with it awkward. And, oh yeah, it was a right hand drive.

I didn’t feel that the right hand drive was the most challenging part of the experience. My brain adjusted to the different orientation within the first few minutes of driving. The traffic circles, or roundabouts were confusing to me as we were leaving the airport, and it took me three tries before we were able to get on the motorway to head west to Hampshire. To top it all off, it rained steadily on my first several drives. To put that into context, Los Angeles area drivers are notorious for not being the most competent drivers during inclement weather. Fortunately I have had experience with wet weather drives including snow and mountain driving, so we made it to our destination in one piece. Though we did have some funny stories to tell- and embellish.

For those who are contemplating a trip to the United Kingdom or other country that drives on the left side, I’d like to encourage you that it can be done. Know your vehicle as well as your own limitations. Pay careful attention to the road and traffic patterns, and observe traffic laws. By about the third day, I had gotten the hang of driving in England. The roundabouts actually made a lot of sense. The signage was good at most of the roundabouts so I could pretty well figure out where to exit, and the more continual movement of traffic made waiting in a queue much shorter than at an intersection back home. I didn’t learn to easily park the van until day six, and by then, I was returning the car.

On the advice of friends who travel to London regularly, we cut our rental reservation from the original ten days to six. So instead of driving into London and paying an 11.50 GBP congestion charge to bring the car into the city, we took the London Underground into the city from the airport. For the rest of our stay, we relied on London’s famed public transit system and our own two feet. We purchased Oyster cards along with our London Passes. The Oyster cards are a tap card that can be used on the busses, trains, and tube throughout London. This was much more convenient than worrying about parking a car in a city where parking is expensive and traffic is crazy. Like back home. 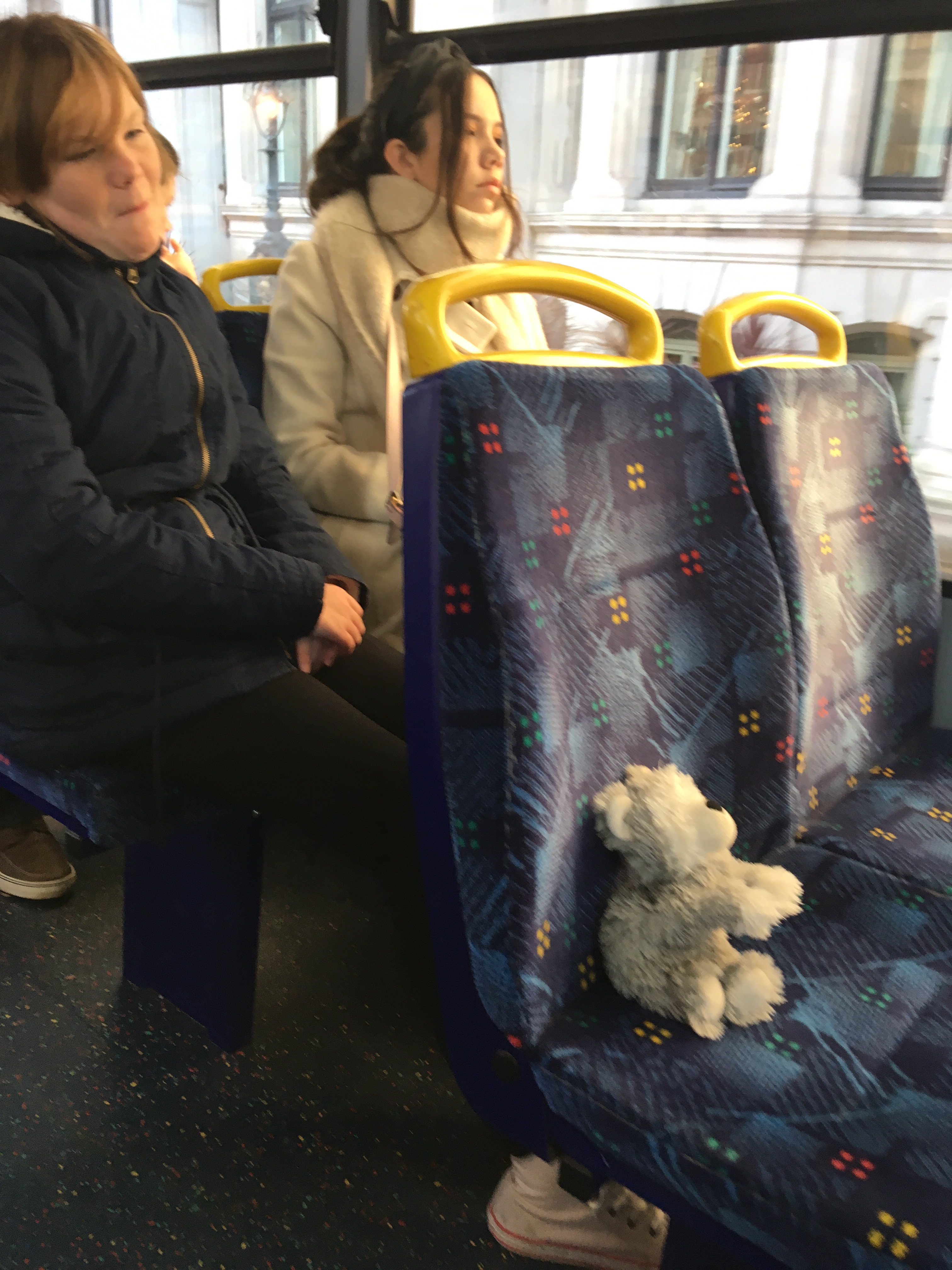 Christopher the Puppy enjoys the view from the double-decker bus

In addition to the convenience, walking through the city gave us the opportunity to really explore the city and immerse ourselves in the experience. We found great food places and enjoyed the Christmas markets because of our walks. The kids enjoyed the public transportation. They particularly liked riding the Underground everyday of our stay in London. The double-decker busses and the TfL River bus were unique experiences for them. I enjoyed not having to finagle my way through traffic. The traffic in Los Angeles is legendary, without the public transportation system to really alleviate the issue, so it was really nice to be in an area that had the infrastructure to help get us where we wanted to go without the road rage.

Some things to consider:

On the advice of a good friend, we paid the extra for the satellite navigation or GPS on the rental van. This was sage advice that I was glad we took. Google Maps worked in many areas, however I’ve experienced lags in the navigation back home depending on location. Getting used to a different vehicle while driving on the opposite side of what you’re used to is not the time to also be concerned with bad directions. The sat nav worked very well most of the time. The only exception was when the M3 was closed for road repairs and the entrance to M27 was also closed for repairs. The result was a long detour through Southampton. This was not a place listed on our itinerary, but the docks looked so pretty all lit up at night. We did eventually make it back to Lymington having made some unexpected new memories.

I didn’t need an international driving permit to rent a car or drive in Great Britain. However, if your travel plans involve a trip over the Channel and into other parts of Europe, you will likely need one. The international driving permit is issued by your country of residence, and you will need to apply for it ahead of time. In the United States, the permits are issued by AAA or AATA.

If you’re purchasing the London Pass with the visitor Oyster travel card, have it mailed ahead of time if possible. It would have helped to be able to use the card as we headed into London. You must have a U.K. bank account for the regular Oyster card and the Oyster app. We picked up our London Passes our second day in London, so we bought a daily travel card to get from the airport to where we were staying in Greater London. This cost us more than if we had purchased one way passes, but we didn’t know that the Fulham Broadway Tube station was about a third of a mile from our AirBnB. Google Maps was not very helpful in finding the cheapest route when in London.

There’s a reason why London’s public transportation system is so famous. It’s really great. We got to where we wanted in a reasonable amount of time and for a reasonable cost. I recommend utilizing TfL as much as possible to avoid unnecessary stress and parking charges.

Public transportation might reduce stress, but it doesn’t relieve us from being safe while using it. Like anywhere, if you see something suspicious, say something. Tube stations are among the places currently listed as having heightened security risks. We didn’t ever feel unsafe while in London, but the tragic London Bridge attacks happened while we were in the U.K. and the day before we headed into the city. It was a reminder to us of the small but real possibility. On a lighter note, be sure to ‘Mind the gap between the platform and the train.’ Accidents can happen.

No matter how you decide to travel, the United Kingdom is a beautiful place to visit. Next stop, London! Happy trails!

For Oyster card options with the London Pass, visit here.

For routes and times, visit Transport for London.